Welcome to the Jack County New Edition! We hope that you find our paper to be uplifting, inspirational and fun! Come on in, check it out! We would love to hear your ideas for stories, and of events that are happening around the county. We are the voice of ALL of Jack County! 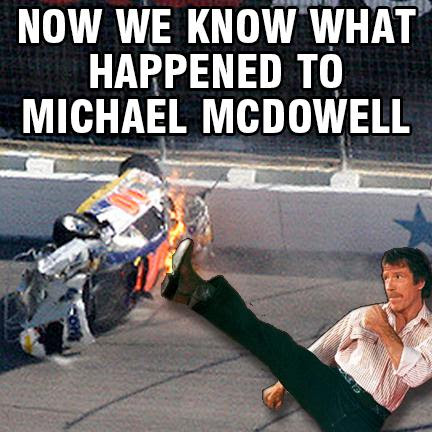 Norris will introduce the eight drivers still in contention for the championship – Jimmie Johnson, Kevin Harvick, Kyle Busch, Matt Kenseth, Denny Hamlin, Carl Edwards, Joey Logano and Kurt Busch – that will include a special twist during pre-race activities leading up to the AAA Texas 500 (1 p.m. CT, TV: NBC, Radio: PRN, Sirius XM, 95.9 fm The Ranch local).
“I can’t wait to get to Texas Motor Speedway to see all those incredible NASCAR fans and have the honor of introducing some of the most courageous and daring athletes in sports,” Norris said. “I’m looking forward to some dramatic racing, visiting with (Speedway Motorsports, Inc. Executive Chairman) Bruton (Smith) and (speedway president) Eddie (Gossage) and getting an opportunity to meet (race Grand Marshal) Dennis Quaid. It should be quite an entertaining day.”
Norris has been immortalized for that machoism on the Internet through numerous memes known as “Chuck Norris Facts,” so it’s apropos that the martial arts legend will pay homage to the toughness of the Chase drivers with speedway-created memes for each of them. Each meme will follow his introduction of those eight Chase drivers and be shown on “Big Hoss,” the world’s largest TV, for the race fans in attendance.
In honor of his visit to Texas Motor Speedway for the AAA Texas 500, the speedway also will feature racing-themed Chuck Norris memes beginning today with the first of seven. A meme will run daily today through Friday and return with one Monday, Oct. 31, and Tuesday, Nov. 1, of AAA Texas 500 race week.
“When we were told that Texas Motor Speedway wanted to create racing-related memes to honor my visit, I thought it was a very creative idea given how popular the ‘Chuck Norris Facts’ have been and continue to be for my fans,” Norris said. “I can’t wait to see what they come up with in the memes and I appreciate them honoring my visit in that fashion.”
Texas Motor Speedway also will begin a week-long contest that will run today through Monday, Oct. 31, where fans can submit their own meme for any of the Round of 8 Chase drivers. The contest info will be available on all of the speedway’s social media platforms with a link to the meme album on its Facebook page for submissions. If a fan’s submission is selected, it will be featured on Big Hoss during the driver introductions and then printed, signed by Norris and mailed to the individual.
Norris first made his mark as a renowned martial arts teacher and six-time professional middleweight karate champion. His legend grew when he became the first man from the Western Hemisphere in the 4,500-year tradition of Tae Kwon Do to be awarded an eighth degree Black Belt Grand Master ranking.
He moved into acting and went on to star in 23 motion pictures, including “Delta Force,” Code of Silence, “Missing In Action,” “Breaker!, Breaker!,” and “Return of the Dragon.” He also starred in the CBS hit television series “Walker, Texas Ranger” for 8½ seasons and that syndicated show is now seen in more than 80 countries with an average of 1 billion viewers daily.
Norris is a New York Times best-selling author of three books and also a popular weekly columnist for WorldNetDaily.com. Most recently, he launched a syndicated weekly health and fitness column called C-Force to help inspire and improve the health and fitness of his readers.
His latest venture is CForce bottled water, which is derived from an artesian spring beneath his Lone Wolf Ranch in Navasota, Texas, where he resides with his wife, Gena, and twins, Dakota and Danilee. Founded and owned by the couple, CForce Bottling Company includes a 53,000-square-foot, full-service bottling facility that is located on their ranch property.
Follow Norris on his website www.chucknorris.com and the following social media accounts along with more than 6.2 million followers:
Tickets for the AAA Texas 500 begin as low as $49 and are available by visitingwww.texasmotorspeedway.com or by calling the speedway ticket office at 817.215.8500. The AAA Texas 500 NASCAR tripleheader weekend also includes the Camping World Truck Series Longhorn 350 on Friday, Nov. 4, and the XFINITY Series O’Reilly Auto Parts Challenge on Saturday, Nov. 5.
Tweet